One of the best accessories for winter.

When I was little my Grandma had a collection of hot water bottles. We called them “hotti botties”. They hung in a row on the back of the door to the cupboard under the stairs. Each one had a crocheted cover made from wool remnants left over for making jumpers. Living in a cottage in north Wales they were an essential part of winter and I hated them.

Why did I hate them? In my mind they were rubber bags full of boiling water just waiting to burst all over me when I was in bed and scald me to death. And if you were unlucky and it has a crocheted cover you could accidentally poke your fingers through the holes and 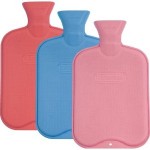 burn them on the searingly hot rubber underneath. If you think too hard with a vivid imagination you believe anything can happen don’t you.

Somehow I managed to survive. Each winter when I visited I learned the ritual of filling the kettle,   warming the water,    carefully holding the bottle as the water was poured (This avoids a belching moment and the water coming back out). Then the top is tightly screwed on, dried with the tea towel and the hotti bottie is cradled until the warmth starts to seep through.

Finally, a quick dash to the ice cold bedroom. Put the bottle under the covers (at the optimum point) in the bed to make it as warm as possible. Thirty minutes later you go to a bed that is blissfully warm.

Later camping on the snowline I used my metal drinking bottle as an improvised hot water bottle. Fill with boiling water; put it in a sock and away you go. You can even drink the water in the morning. Don’t try that from a rubber hot water bottle please!

Only recently I have realised that hot water bottles start life naked and unclothed, you buy them in their raw form and customise them. Bare they look hilarious and unhappy.  In this day and age there are probably not may that wear a crocheted jacket, they have knitted

hats and coats; dress up as polar bears or elephants or rabbits. Mine is fake fur and patterned like a snow leopard. It’s brilliant and does not actually look  like a snow leopard – remember my vivid imagination might run riot again.

It is cold outside and my Hottie Bottie has kept me company the past few evenings. If the snow and cold keep going it will get a lot of use this winter. Perhaps even be given a suitable moniker.

This entry was posted in life and tagged camping, cold, hot water bottle. Bookmark the permalink.